Aviation is proof that, given the will, we have the capacity to achieve the impossible.
-Edward Vernon Rickenbacker

Upon hearing that a couple of bicycle mechanics in the city of Dayton were working on what would become the first airplane, the editor of a Dayton newspaper responded to the Wright Brothers' news by saying, "Man will never fly.  And if he does, he will never come from Dayton." 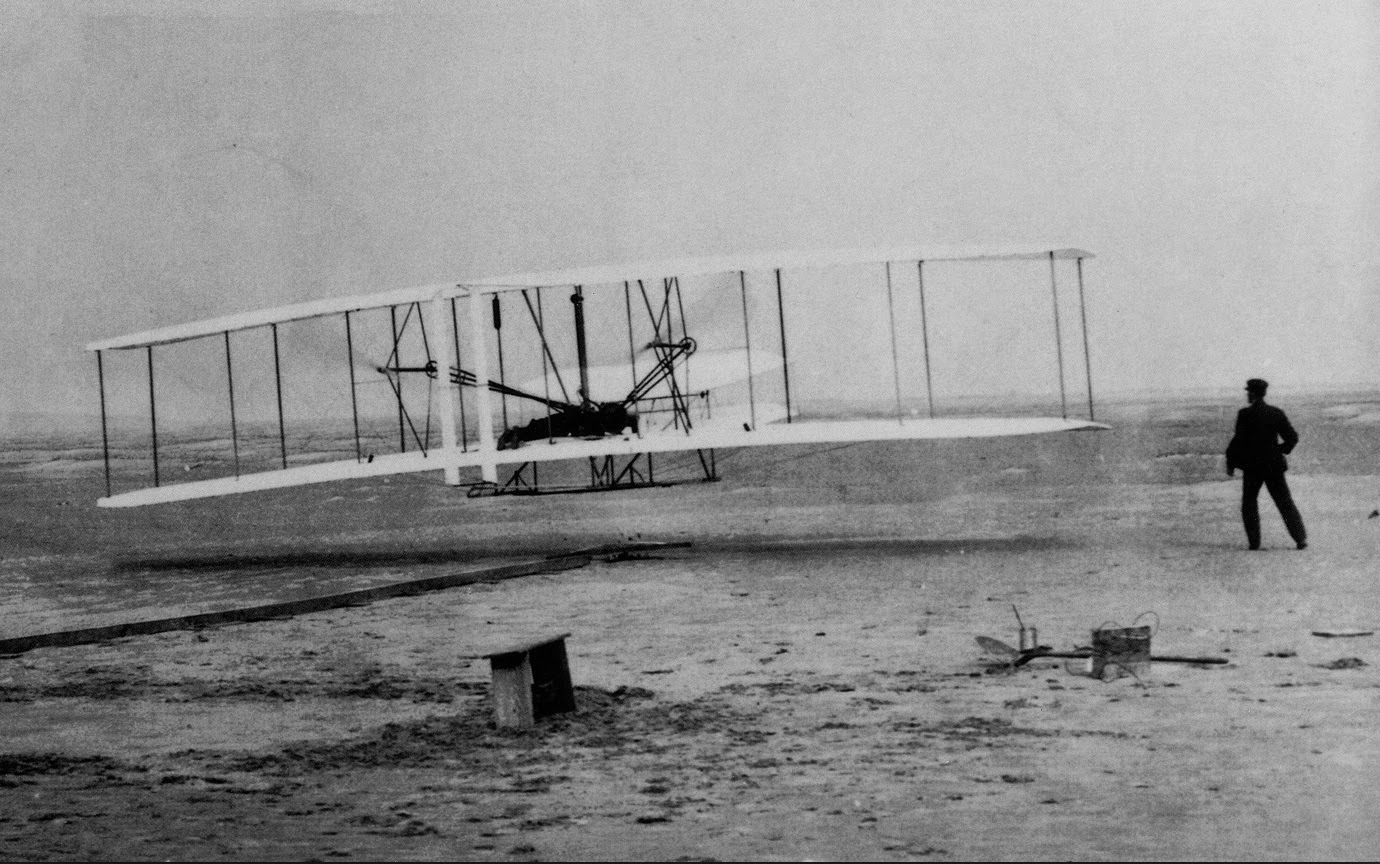 We who think we know it all are often surprised.

I've never been happier to pull into a dark high school parking lot at 6:00 A.M. on a Sunday morning.  I was meeting Matt Reynolds and Elizabeth Sandoval to take part in their masterpieces. Elizabeth's is a combination of journalism and photography.  Matt's is aviation. 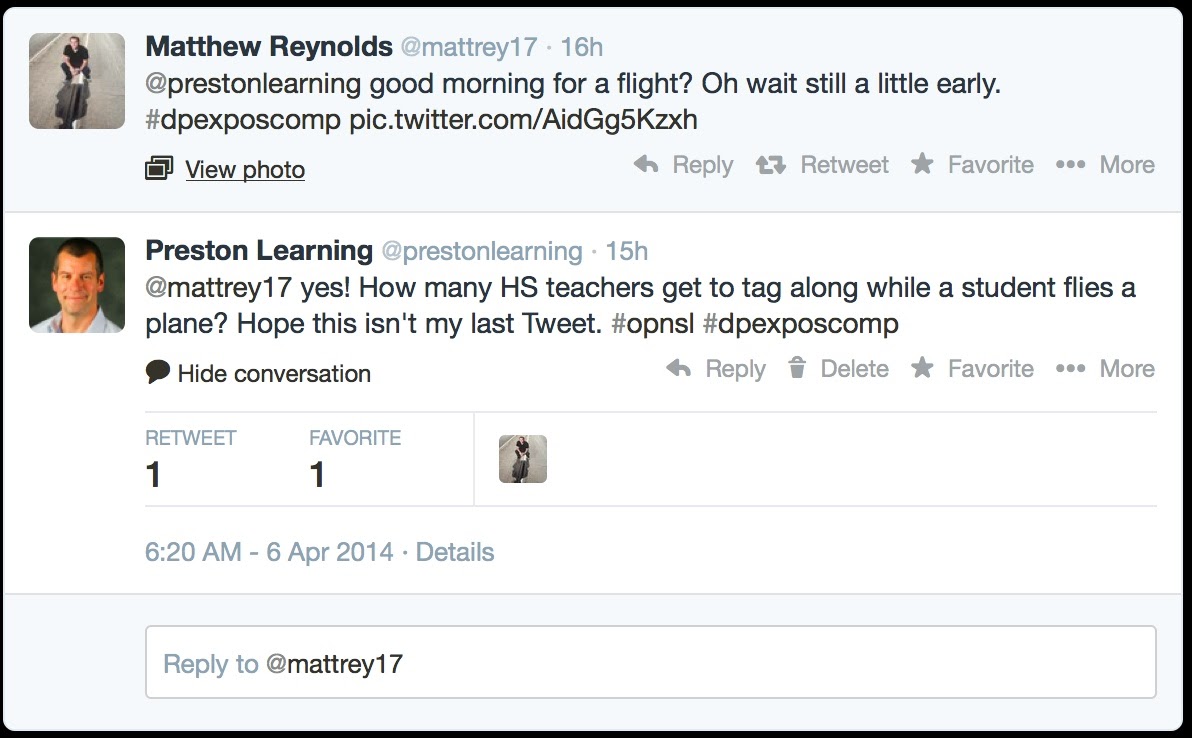 Matt was about to take us for a flight in a 1960 Piper Tri-Pacer that belongs to his brother's father-in-law, Ed Mandibles.  Ed is quite a story in his own right: the son of the first female DMV examiner in the state of California, Ed is president of a Piper club that draws hundreds of people to the Lompoc airport every July.  He proposed to his wife in the plane we flew.  His children have flown it and now his grandchildren do--although he has to pry 5 year-old Aubrey's hands off the wheel when it's time to land, because by then she usually falls asleep.  For 30 years Ed was an engineer at GE, where he designed and built telemetry systems and components of nuclear reactors in the United States and Japan.  He lived in Japan for six months at a time.  Today, Ed is the unofficial mayor of the runway.  As we stood outside the hangar, Stan and some other retired pilots cruised by on their bicycles (one of which Ed built) to say hi. 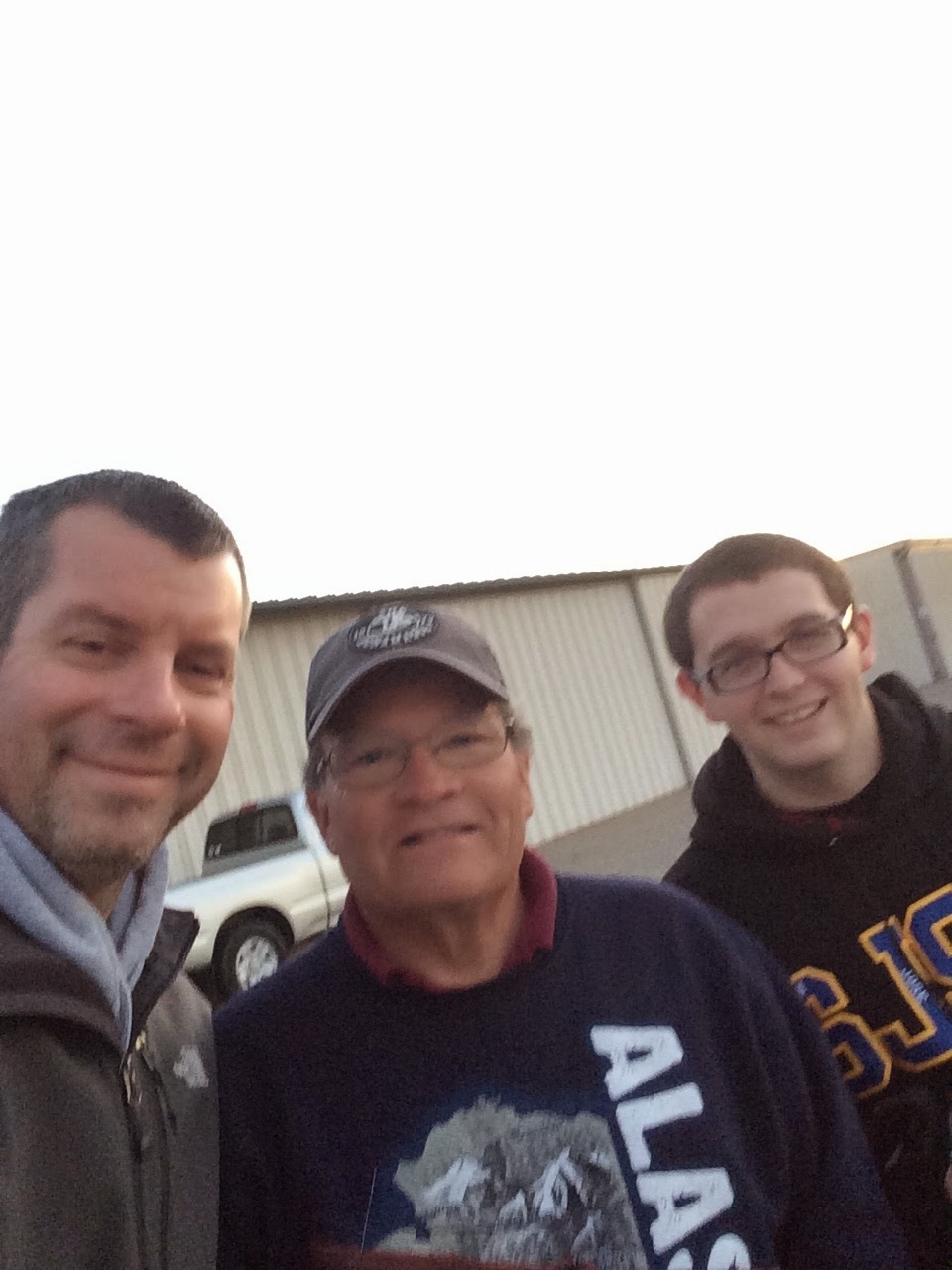 When you buy an airline ticket you enter into a contract with a corporation.  You are promised that your pilot will be trained, experienced, and sober.  (Or are you?  What does the fare actually buy you?)  You don't have any responsibility for evaluating talent; most of us never even see the pilot, much less her qualifications.  After a couple mouse clicks you trust the corporation's promise to deliver you and your stuff somewhere under very specific conditions with exclusions that limit the corporation's liability.  From jetway to jetway there isn't much except the tiny window panoramas to suggest that we are doing anything other than sitting around.

Flying with friends in a small plane is a completely different experience.  From the moment you squeeze in and put on the headphones there is no doubt you are actually FLYING.  Each updraft is a powerful reminder.  Since the pilot isn't wearing a uniform (although Ed's Alaska sweatshirt did have a plane on it) you might even be tempted to ask, "Should I put my life into the hands of a retired hobbyist and...a...TEENAGER?"

Contracts are not the best way to determine whether someone has the ability to do what they say they can do.  We can develop and rely on our instinctive abilities to evaluate character, training, experience, credentials, and expertise.  This is the most effective way I've found to decide whether I'm going to place my trust in someone.

Welcome to the Trust Economy.

I don't sacrifice my Sunday morning bike ride or pancakes with my daughter easily, but I trust Matt and I knew he'd come through.  I confess that I was slightly relieved that we would be accompanied by his mentor.  Ed reminded me of my Grandpa, who flew The Hump and The Berlin Airlift.  Ed was clearly an experienced expert.  Plus, as is so often the case with pilots and others who understand the physical universe better than most of us, Ed is totally down to Earth and insatiably curious.  He is a tinkerer and had several projects going in the hangar where we met him. 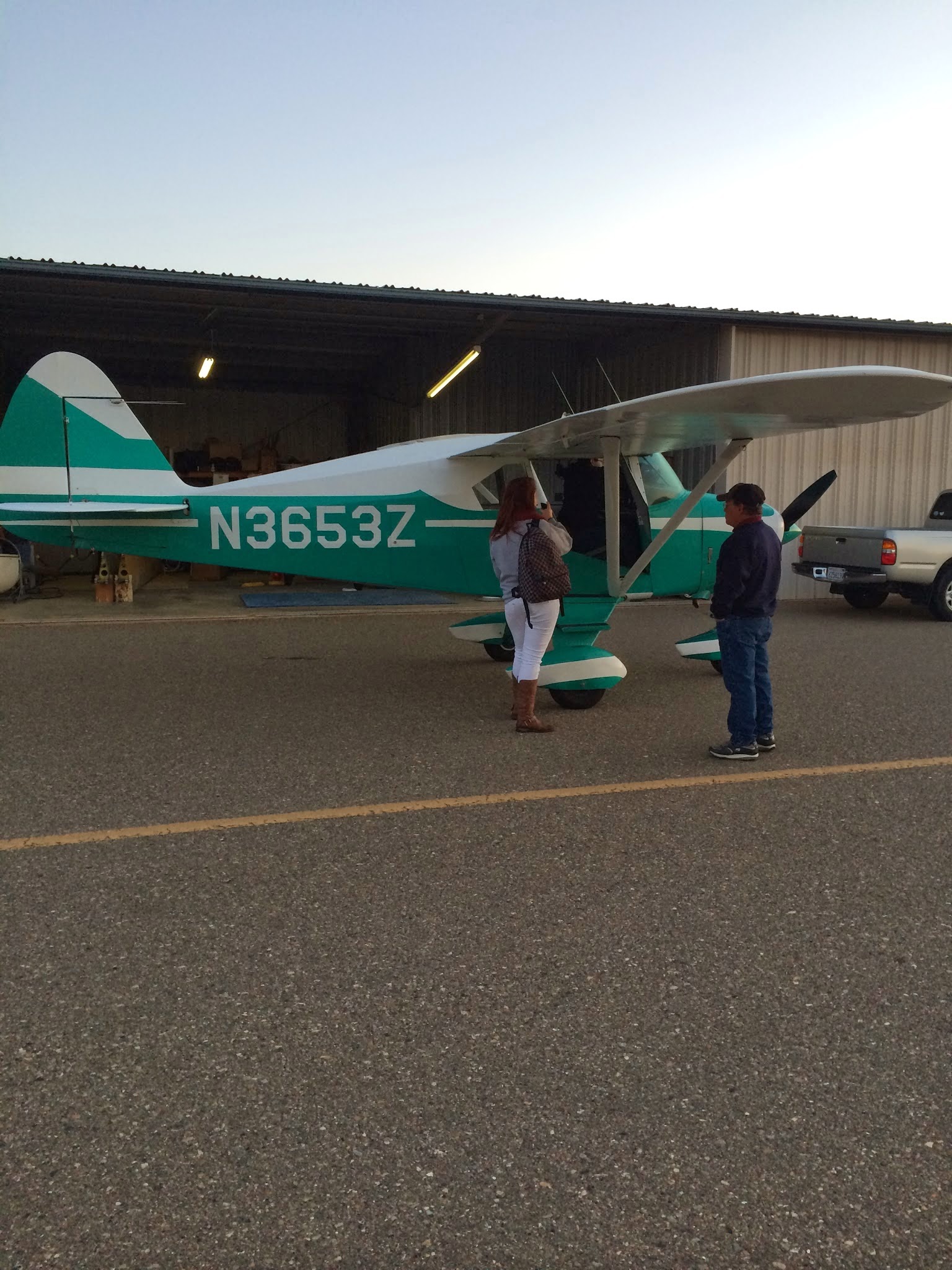 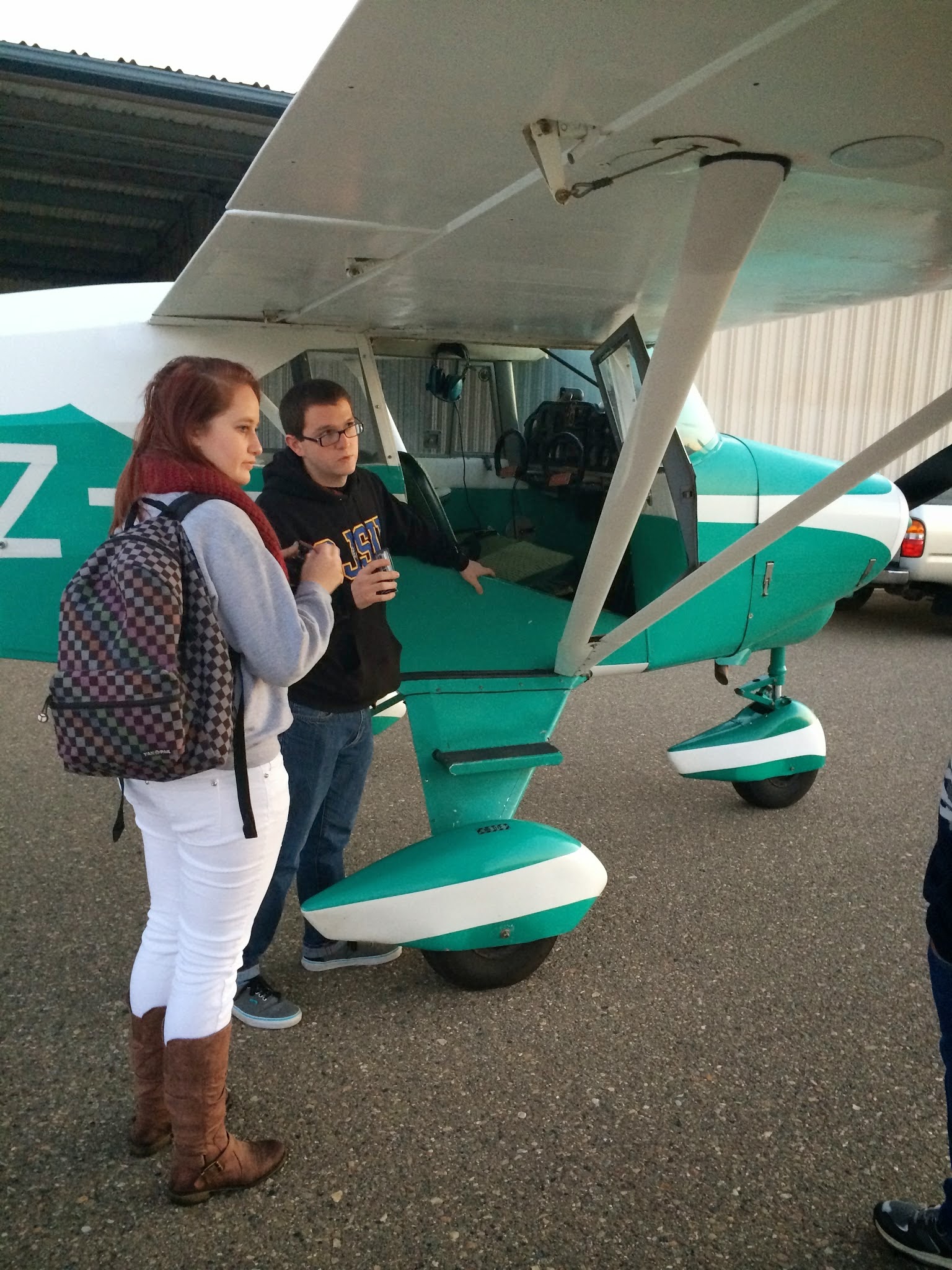 In the second picture above you can see how intently Matt is listening to Ed.  As I watched Matt learn from an expert and go through his pre-flight checklist I was able to focus on the learning (much easier when I'm not also sharing content/facilitating discussions, grading, taking attendance, etc.).  I reflected on how superficial testing is while I mentally checked off learning theory after learning theory, outcome after outcome, and naturally the "new/improved" Common Core boxes: communication, collaboration, critical thinking, creativity...  All evident in abundance.

The ride was amazing.  Apart from the sheer magic of defying gravity, Ed and Matt gave Elizabeth and me an education on aviation, geography, the history of the region, and the people who live here.  We flew from Lompoc out toward Jalama Beach, then back through the Santa Maria Valley (over RHS, but I didn't get a good picture) and then up the coast toward Pismo and over my neighborhood. 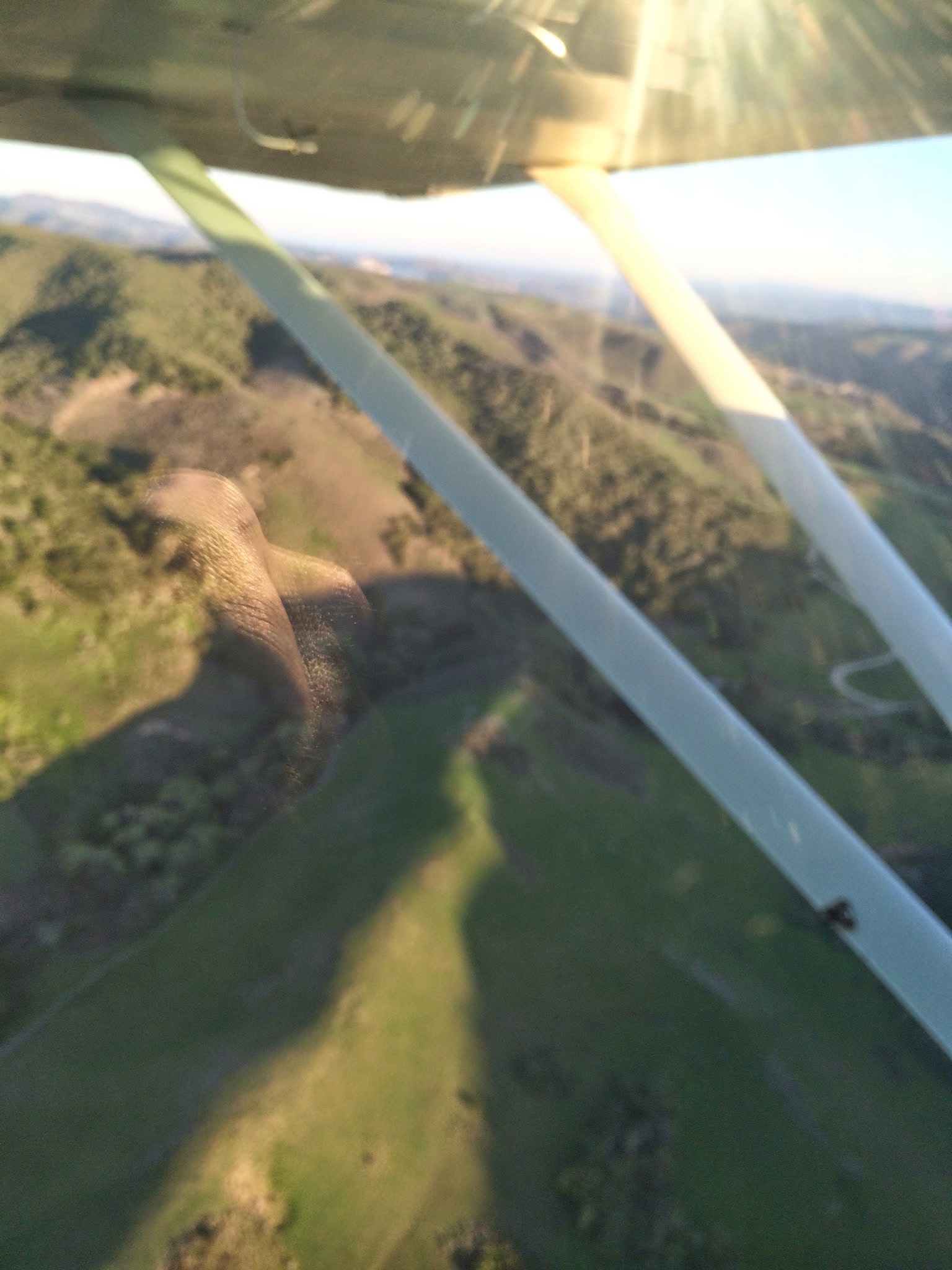 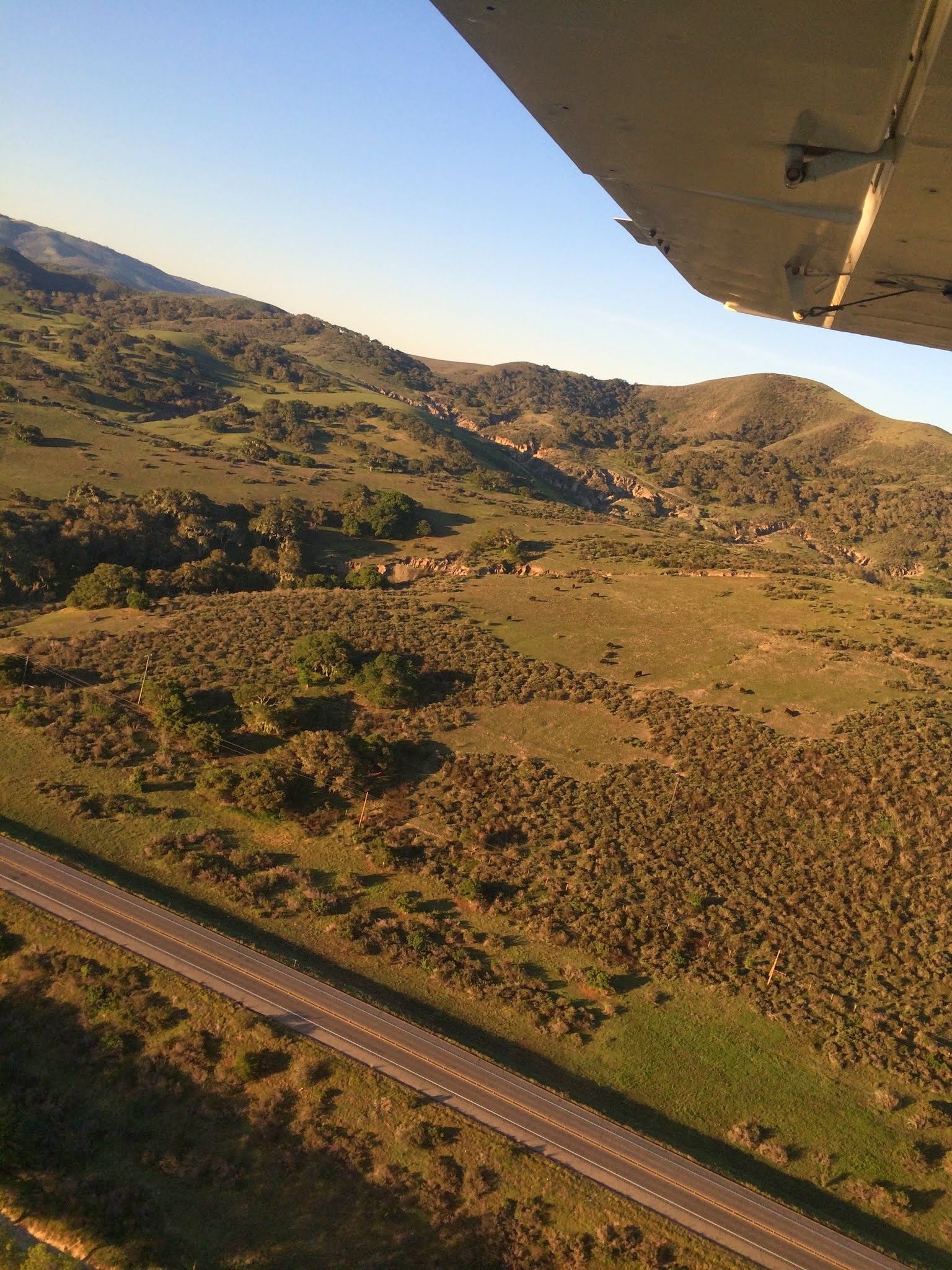 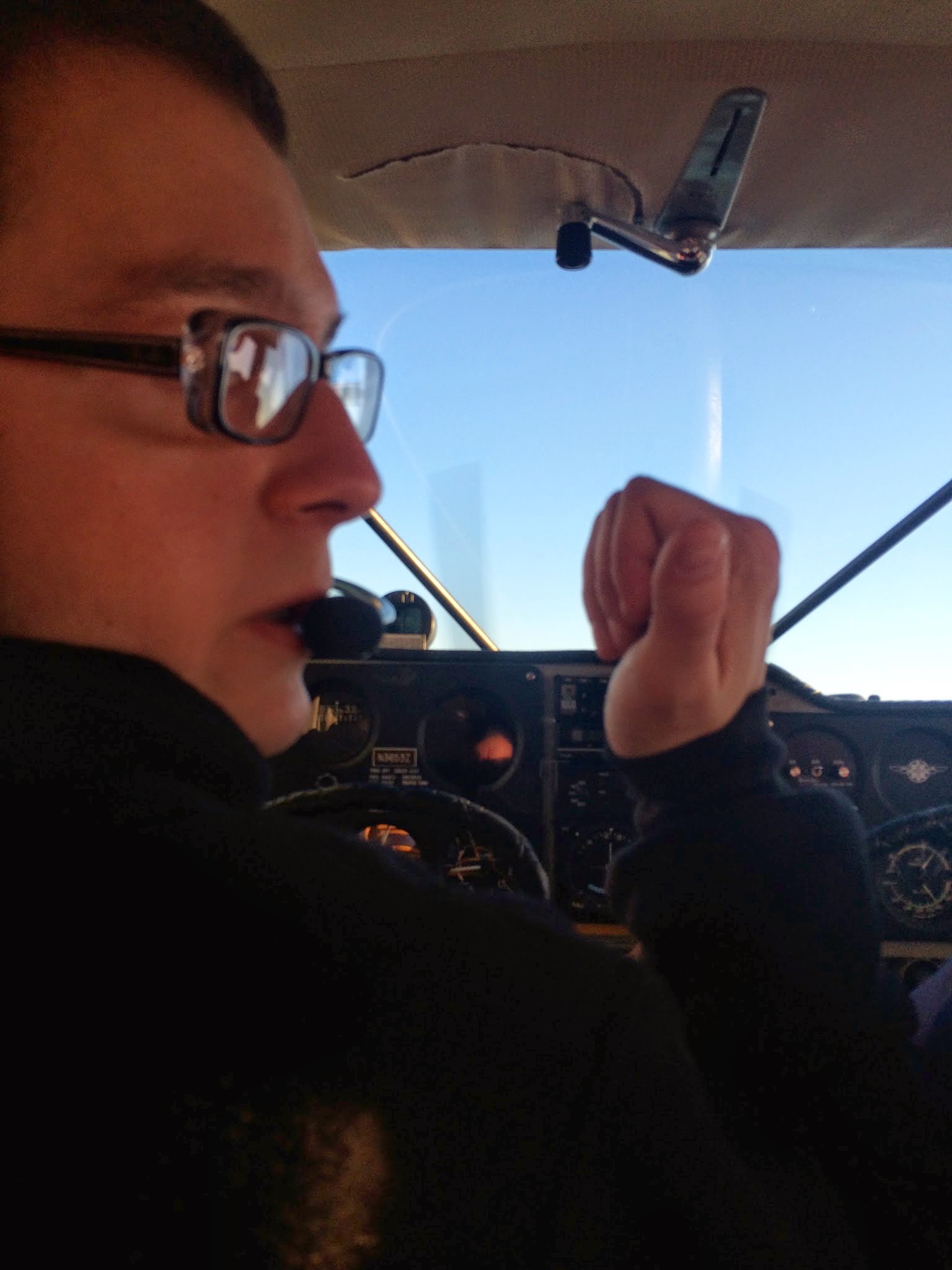 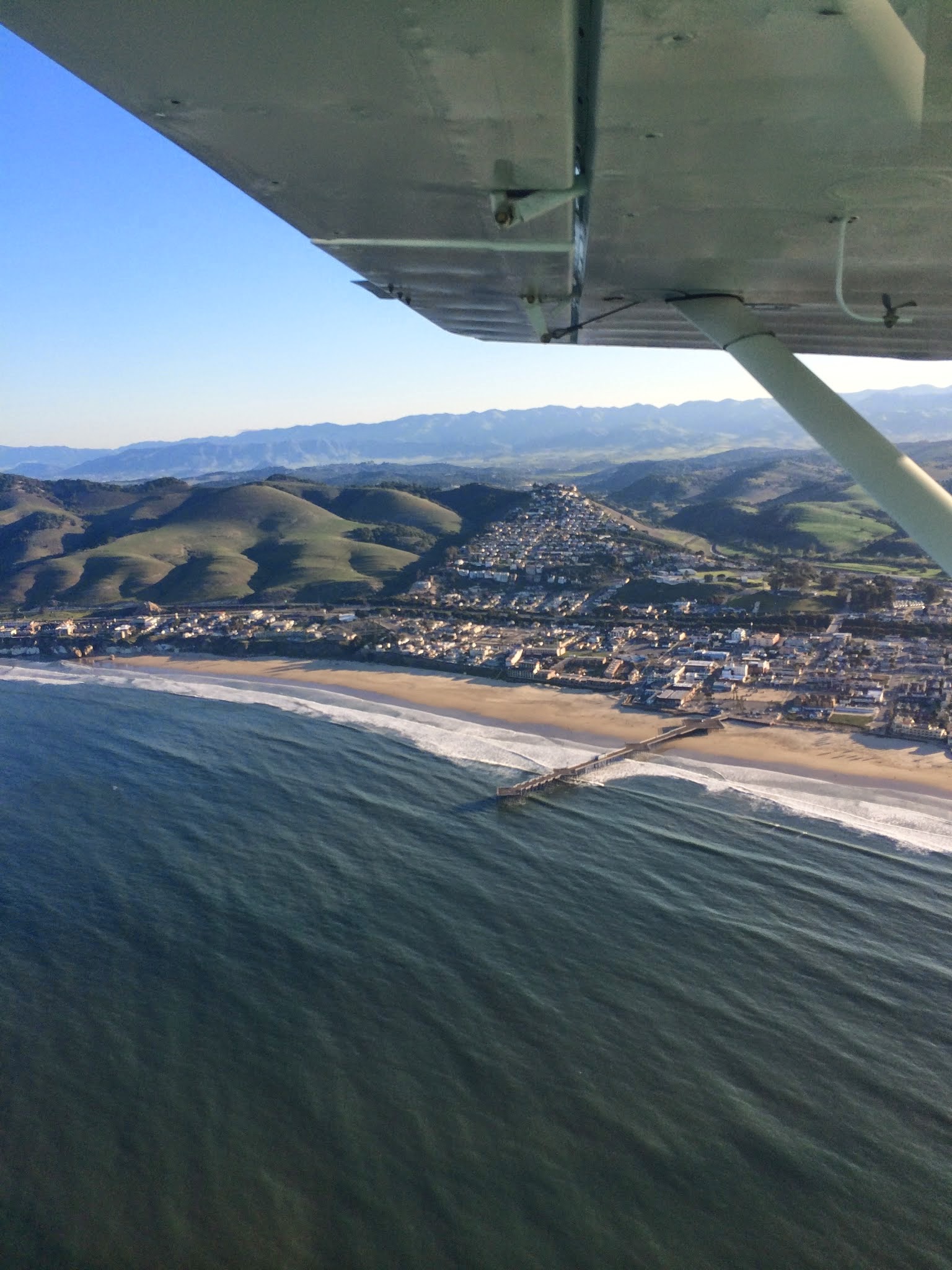 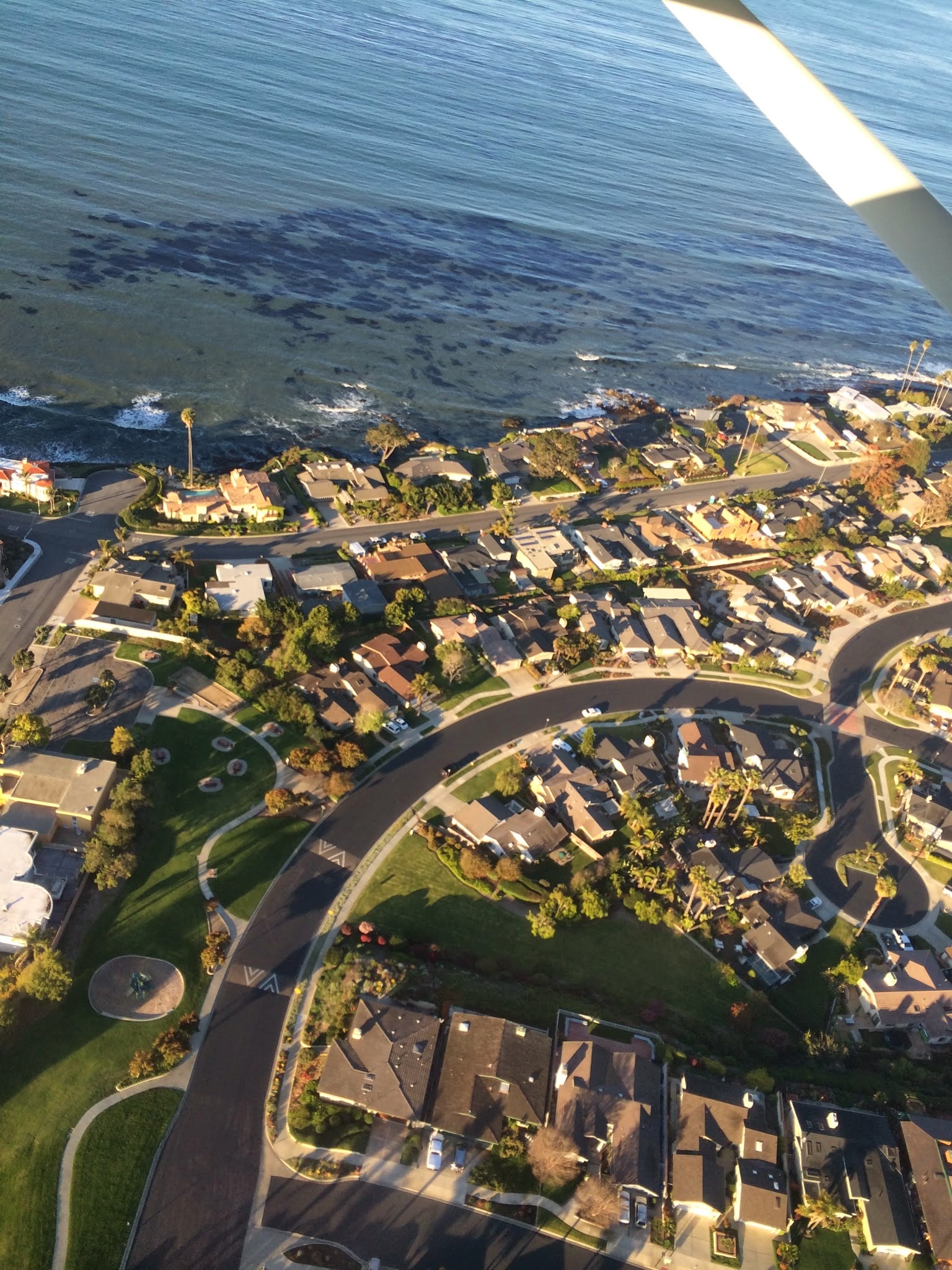 Professional educators and policy makers spend way too much time and energy gathering and explaining one-dimensional circumstantial evidence.  Multiple choice tests had their day when 1 GB of memory cost $300,000 and there wasn't any way of documenting real-time interaction or mastery.  Now that we can stream and remix our learning narratives in multiple media to everyone with an Internet connection, that era is over.  Can you imagine an athlete being recruited based on letters of recommendation alone?  How long before a diploma isn't good enough, and employers want to see what you've already done?

If you want to know whether Matt Reynolds can take off and land in a 1960 Piper Tri-Pacer, here's the most authentic performance metric there is.  Keep in mind this is just an amateur with an iPhone over Matt's shoulder-- a better videographer and equipment/production (GoPro, audio through the plane's intercom, etc.) will enable Matt to document every move he makes and use media to improve his own performance and teach others,

As I sat in Ed's single-seat Mooney back in the hangar, he told me that what he loves most about flying is sharing his passion with other people.  This is the secret sauce of Awesome.  It is no coincidence that we started this year's conversation about our masterpiece fields of inquiry by asking each other to identify a personal passion that we could share with the world. 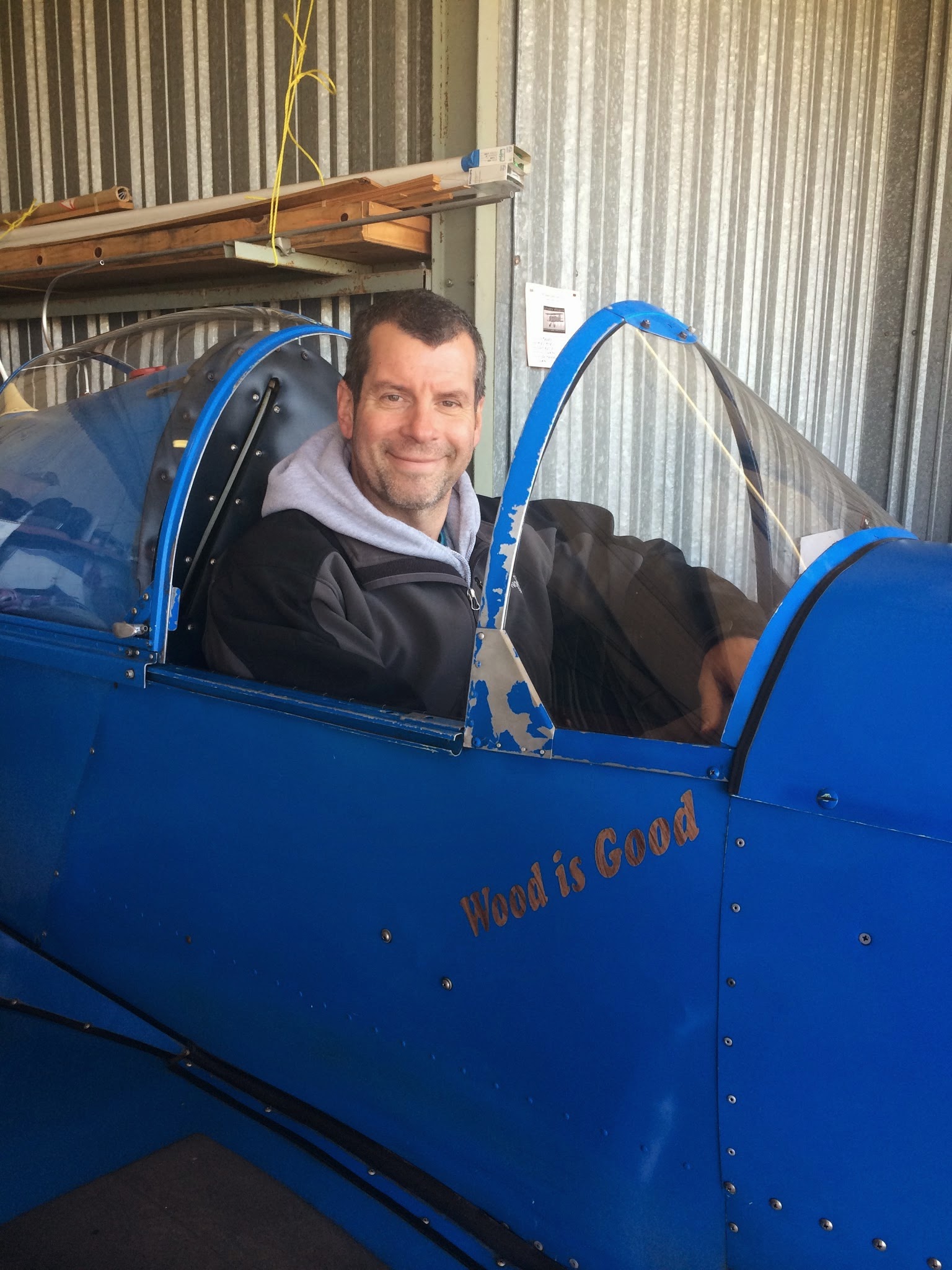 In Matt's car on the way back to school, I practiced some critical thinking of my own and tried to see high school from his perspective.  He's been admitted to San Jose State where he's set to begin the professional path to commercial pilothood.  He has motive, opportunity, access to an expert mentor, and the tools to get more information and tell his story.  A while back Matt wrote, "For me high school is a waste of time."  Apart from learning how to correct the grammatical errors in the rest of that paragraph, he might be right.  Fortunately it's a problem we can solve.

Your mission is the same as Matt's.  You have chosen an interdisciplinary masterpiece topic that you care about.  For the rest of the year, the reading and writing you do as you explore this topic will satisfy the requirements for ERWC.  So use this hour, this course, this Open Source Learning process, and this community to achieve the impossible.  Share your passion and your progress through digital media with a network of peers, the public, and at least one expert in the field.  Get your Thoreau on: Go confidently in the direction of your dreams! Live the life you've imagined.  Don't wait for graduation or Someday, and don't give up.  Your network is here to help.  There is a lot to be said for keeping your feet on the ground.  There is even more to be said for keeping your head in the clouds.
Posted by Dr. Preston at 9:55 PM

This work is licensed under a Creative Commons Attribution-ShareAlike 3.0 Unported License.